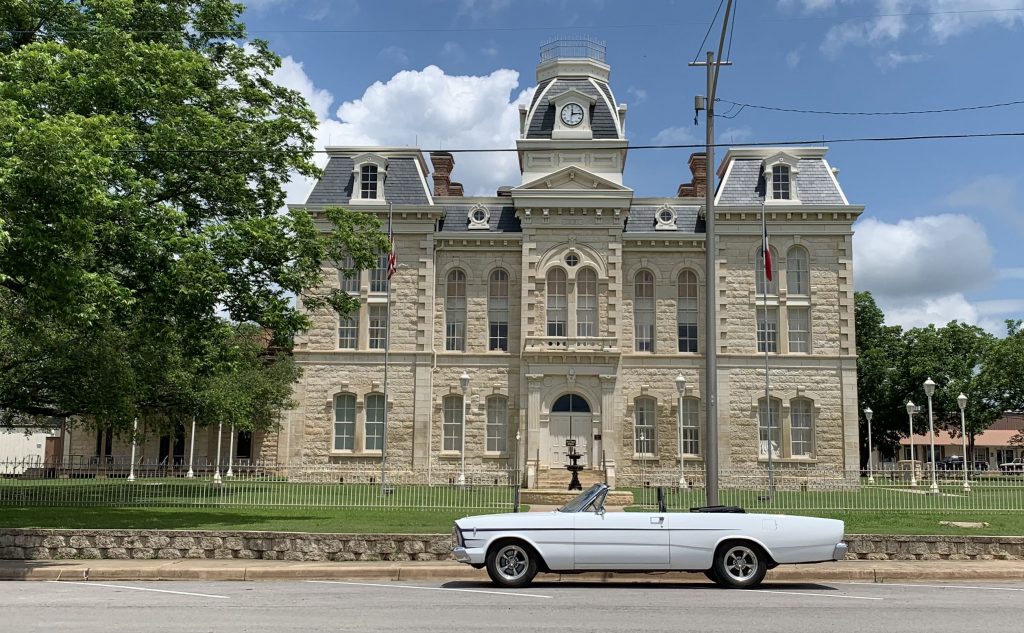 This was our one hundred-fifty-third Courthouse in Texas to visit. That means we are at 60.2% of our goal with 39.8% left to go.

Robertson County was officially organized in 1837, named for empresario and signer of the Texas Declaration of Independence Sterling Clack Robertson.

The first county seat of Franklin (later to be known as Old Franklin), named for pioneer Will Franklin, was formed at the center of the county. The first courthouse and jail were completed there in 1839. By 1846, sixteen other counties were carved from lands belonging to Robertson County, leaving the county with its present boundaries.

By 1850, Old Franklin was becoming depopulated and the county seat was moved about twelve miles southeast to Wheelock near the Old San Antonio Road, which was a more heavily populated area. Formed in 1833, Wheelock was named for its founder, Eleazer Louis Ripley Wheelock. The county’s second courthouse was completed there in 1850. The new county boundaries left the county seat too far to the south and in 1854 county residents petitioned for a new county seat near the center of the county.

In 1855, the town of Owensville, named for the first county clerk of Robertson County, Harrison Owens, was platted five miles northwest of Old Franklin and the county seat was moved there in 1856. Land for the county’s third courthouse was donated by settler David H. Love and the county’s chief justice, A. L. Brigance was hired to build it. The courthouse, a virtual replica of the Wheelock courthouse, was a two-story, forty foot square wooden structure with an exterior staircase. Court continued to be held in Wheelock until the Owensville courthouse was completed in 1856.

After the Civil War, the county was in political and racial upheaval. In a move to assert their political power, Black leaders, with White Republican backers, including Reconstruction Judge I. B. Ellison, managed to wrestle the county seat away from Owensville in 1870 and move it to Calvert, about ten miles southwest of the site of Old Franklin. The town, platted in 1868, was named for its earliest settler, Robert Calvert. Another attractive aspect of Calvert was the arrival of the Houston and Texas Central Railway in 1868. A house was rented for $50.00 a month for the county clerk’s offices and later, in 1876, the second floor of a brick commercial building was used for government purposes. A courthouse was never built in Calvert, but an impressive jail was completed in 1875. (The jail, still standing and known as the Hammond House today, is often confused for an old courthouse, partly due to an historical marker in front of it designating it as an old courthouse!)

In 1872, the town of Morgan, named for an International Railway Company official, was founded at the center of the county near the site of Old Franklin. In 1879, the county seat was moved one last time to Morgan which was renamed Franklin to honor the name of the original county seat. After housing the court in temporary quarters, the county’s fourth and current Second Empire style courthouse was constructed in 1881 and officially accepted in 1882. Designed by noteworthy Austin architect F. E. Ruffini, the three-story stone building had corner pavilions with Mansard roofs and a clock tower dome with cresting and a pediment over the south side entrance. The building was decorated with a cornice, corner quoins, dormers, bulls-eye windows, segmented arched lintels with keystones over the windows and a small balcony over the south entrance. The building strongly resembled two of Ruffini’s other courthouses, the 1877 Williamson County courthouse and the 1882 Hays County courthouse (both no longer standing.) Ruffini also designed the 1882 jail which still stands on the west side of the courthouse.

A remodeling that began in December of 1923 replaced the buildings original roof with a flat one that was surrounded with “Alamo” parapets and the interior was gutted and reconstructed. (The current county judge, Jan Roe, told me that this remodeling actually saved the building from deteriorating so that a future restoration would be possible.) Annexes were built to the north and west sides of the courthouse in the 1970s and the old jail was also expanded. Starting in 2009, the annexes were demolished and a new rear annex, matching the stone and style of the 1882 courthouse, was completed in 2011. A restoration of the 1882 courthouse’s original roof was completed in 2014 along with the restoration of the 1882 jail.