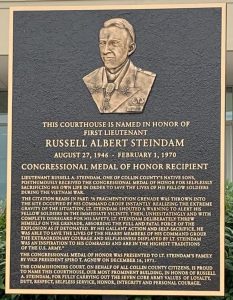 This was our Second Courthouse in Texas to visit. That means we are at .8% of our goal with 99.2% left to go. That is two generations of MossoM in front of the Galaxie.

When the county seat was changed to McKinney in 1848, a log structure was  built on the McKinney square. William Davis donated land from his survey for a town and for a public square for a courthouse. It was replaced  in 1852  with a two-story, wood-frame structure. Before the Civil War, around 1861, this wooden courthouse was moved from the square in order to build larger, stone courthouse. Stone from the quarry at Squeezepenny was piled in the town square.