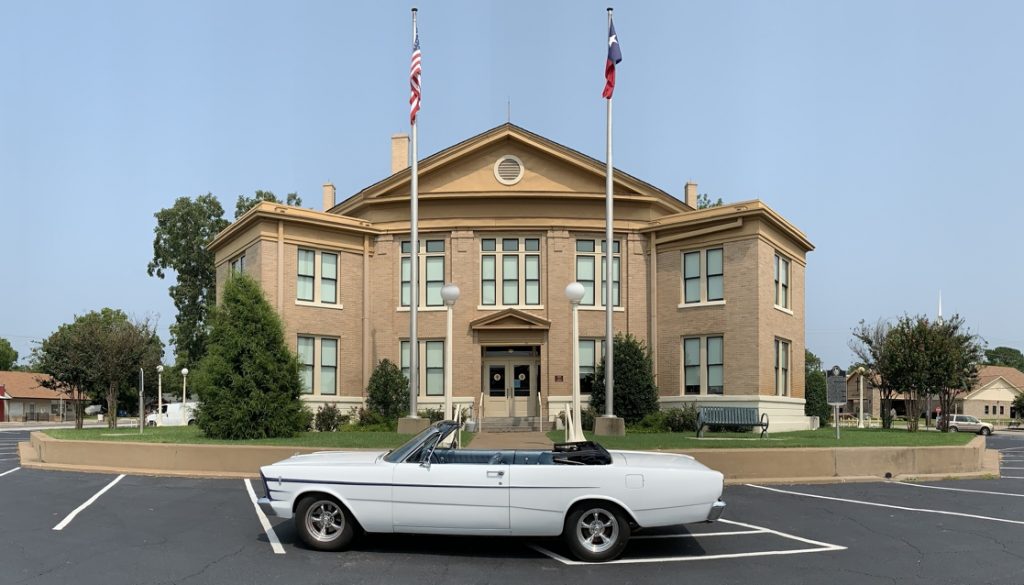 This was our eighth Courthouse in Texas to visit. That means we are at 3.1% of our goal with 96.9% left to go.

The community of Emory was once called Springville, part of Wood County. In 1870, the Texas Legislature created Rains County from portions of four other counties. Named for early Texas patriot Emory Rains, the county chose Springville as its center of government, renaming it Emory and choosing an existing public square for the site of the county courthouse.

The first courthouse, a temporary log structure, served the county for nearly two years, when a two-room building was constructed. It and all the records housed within it burned in 1879, and the county returned to the log structure until a two-story, red brick courthouse was completed in 1884. It was gutted by fire in 1908, but the steel vault containing county records survived the fire. The Bryan Architectural Company of St. Louis, Missouri was selected to design a new courthouse, built around the steel vault still in its original location. Crushed brick from the 1884 building was used in the foundation. The Falls City Construction Company of Louisville, Kentucky served as builder, and the new facility opened in 1909.

The courthouse exhibits a unique cruciform plan with projecting wings. The exterior is of ginger brick, produced at the Fraser Brick Co. in Ginger (3 mi. East); both the town and brick were named for the distinctive clay color. Designed in the Classical Revival style, the structure features pilasters and pediment-capped entries, as well as a central dome, reportedly not part of the original design.

The courthouse square has long served as a social gathering place. Notable speakers on the square have included U.S. Speaker of the House Sam Rayburn and former president Lyndon Johnson. The site of community fairs, festivals, celebrations and parades, the square continues to be a focal point for Emory and Rains County.

The current courthouse is the fourth for Rains County since its creation in 1870. The county and county seat were named for Emory Rains, a Republic of Texas senator, state legislator and early settler in the area who helped to establish Rains County.

The first courthouse was a log building, used temporarily until a two-room structure was built in 1871. The 1871 building burned down in 1879, taking with it all the county records up until that time. Court was moved back into the log building until the completion of the third courthouse in 1884. The third courthouse, which stood where the current courthouse stands today, was a rectangular, two-story building built of red clay and sand bricks. It had pilasters between each bay of windows, a Mansard roof, and a central, truncated tower. This time, the courthouse was equipped with a steel vault to protect the county records and when a fire gutted the 1884 courthouse in 1908, the records were unharmed.

When the current courthouse was constructed, it was built around the old vault from the 1884 building, thus preventing the addition of an entrance on the courthouse’s north side. The two-story Maltese cross-shaped, Classical Revival style building, designed by St. Louis architect Andrew J. Bryan, was built of “ginger” brick (named for its color) and has projecting, two-story wings between the entrances. Although originally planned to be on the west, south and east sides, the entrances ended up facing the northwest, southwest and southeast. The foundation of the courthouse was built with the crushed brick and clay from the previous building. A central dome of metal slate, which was not in the original plans, was added at the time of construction. The building endured many changes over the years, including a two-story jail addition to the north side in 1952, a new paint job in 1959, peaked roofs added to the extended wings in 1962 and removal of the chimneys. On the inside, wood floors, stucco-covered brick walls and pressed tin ceilings were covered with tile, wood paneling and lowered ceilings.

The two-story district courtroom was split in half in 1964 when District Judge Bowman complained about the intolerable coldness of the courthouse one December day and refused to return to hold court there until the building was equipped with a heating and air-conditioning system. The judge fell ill soon afterward and died, but the work progressed, covering the upper balcony, and adding partitions which shrank the courtroom and created more office space. Fortunately, most of the buildings original interior architecture was just covered up and not destroyed, making it possible to restore. The first monies from the Texas Historical Commission were awarded in 2001, which eventually led to the building’s full restoration.

The 1952 jail addition, which was used until 1986, was torn down by 2006. The peaked roofs on the wings were removed and the building’s original color scheme has been restored. Once uncovered, workers found that the original pressed tin ceiling in the courtroom was mostly intact with only small portions needing to be replicated. The theater seats in the gallery of the courtroom are one of the only things that are not original, but they have been copied to match the originals. The stucco on the interior walls has been returned to the original pale-yellow color and the wood trim, wood frame doors and windows, wood floors in the courtroom and wood staircases look brand new. Today, the Rains County courthouse proudly takes its place among the dozens of restored county courthouses in Texas.