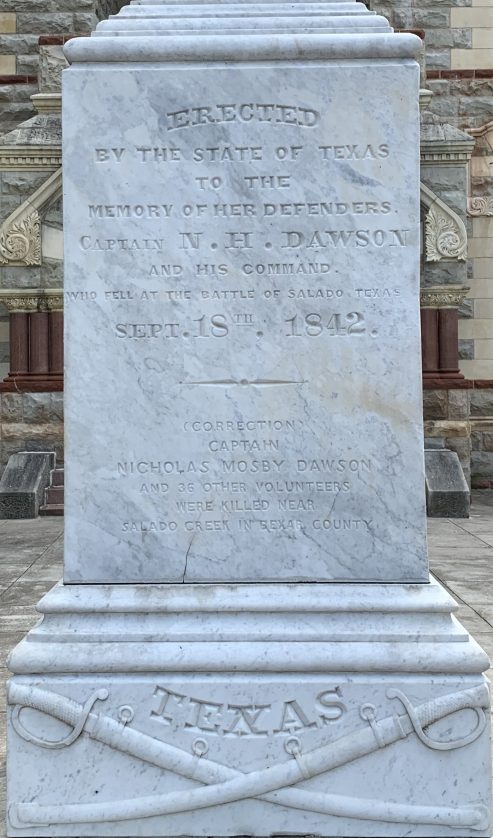 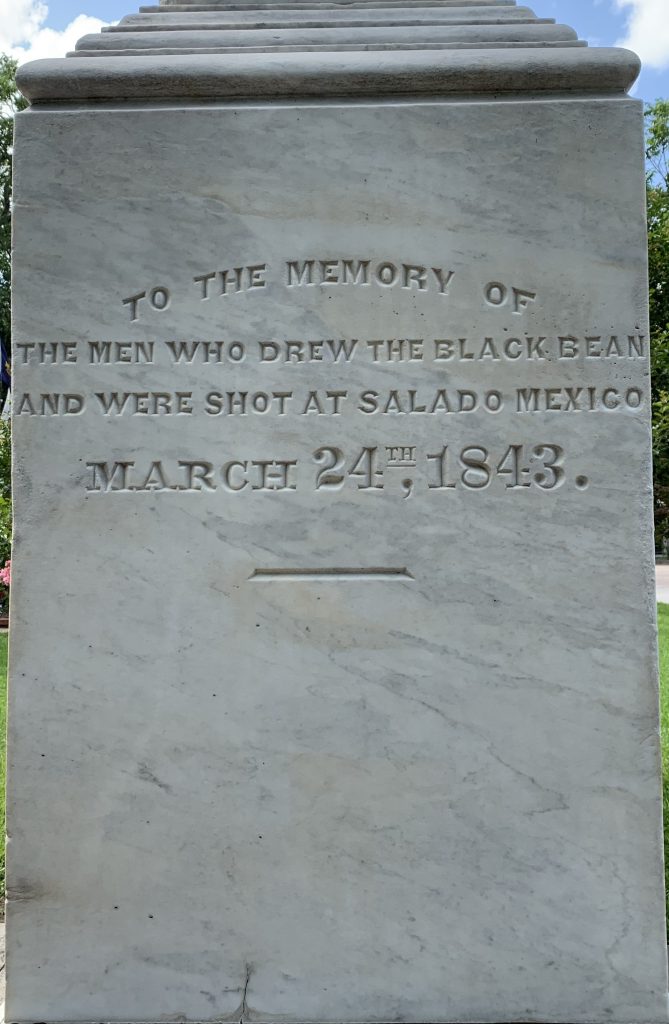 This was our one hundred-seventy-ninth Courthouse in Texas to visit. That means we are at 70.5% of our goal with 29.5% left to go.

Fayette County was officially organized in 1838, named after American Revolutionary War hero, the Marquis de Lafayette. The town of La Grange (meaning “the barn” in French) was platted in 1837 and became the county seat. The name was derived from Lafayette’s chateau southeast of Paris, France.

The first courthouse that was established in 1838 was actually a store and saloon, formerly occupied by Ben F. Nabers(Nabors?) It was bought by James S. Lester and William M. Eastland for $250.00 and moved to the courthouse square. The small, wooden structure was 30′ x 16′ with five windows on the longer sides, double front doors and a gabled roof. Having no interior partitions, the district court had to be held in rented quarters and county offices were rented from businesses around the square. This courthouse was demolished for a second, more permanent building that was built in 1848 by contractor P. C. Beale. The original plans specified for a two-story, 30′ x 40′ brick structure with a stone foundation but, most likely due to the lack of funds, a wooden building was constructed instead. The courthouse’s first floor contained a courtroom with a 13′ ceiling and the second floor was divided into rooms for the clerks, the sheriff and the jurors. A cupola on the roof contained a bell that cost $100.00, $20.00 of which was donated by the citizens of La Grange. When the second courthouse was replaced in 1857, it was sold to James Haynie for $1,180.00 and moved to a corner lot at Travis and Washington streets where it served many purposes until it’s demolition in 1928, including a grocery store and a print shop for Judge A. Haidusek’s newspaper, Svoboda. The bell from the cupola was sold to the Travis Street Methodist Church.

Fayette County’s third courthouse was completed in 1857 at a cost of $14,500. It was designed by architect William Rosenberg (aka Carl Wilhelm von Rosenberg) and built by H. L. Kreische. Resembling the Greek Revival architectural style, it was a substantial, two-story, rectangular stone building with corner quoins, a simple cornice and short parapet. An iron balcony was perched over the front double-door entrance and a large, central, triple-tiered tower rose from the low hipped roof. The square base of the tower rose 10 to 15 feet with a cornice separating it from an octagonal middle section that had louvered windows with pilasters between them. On top was a small, gilded dome with a weather vane. The county paid $300.00 for a bell to be installed in the middle section of the tower and sometime later a clock was installed in the lower section with a clock face on the front façade. The basement and first floor of the courthouse were used for county offices with the second floor designated for the courtroom. This courthouse served for over thirty years until the building was deemed unsafe and demolished in July of 1890 for the construction of a new courthouse.

The fourth and current Fayette County courthouse was built in 1891 at a cost of $99,407.04 and was designed by noted Texas courthouse architect James Riely Gordon with contractors Martin, Byrnes and Johnston (listed on the cornerstone as Martin Burns & Johnsen.) Of the twelve surviving Texas county courthouses designed by Gordon, the Fayette County courthouse is the oldest and is often compared to the much larger courthouse that Gordon designed for Victoria County. It was built in the Richardsonian Romanesque style of architecture that Gordon became known for and the exterior contains four different types of native Texas stone. The alternating use of Belton white limestone and Muldoon blue sandstone is most evident in the voussoirs over the entrances and windows and inside the pediments. Gordon also included Pecos red sandstone stringcourses and his trademark pink Burnet granite columns. Each side of the three story courthouse has five bays and central, arched entrances framed by extended pedimented pavilions with checkerboard patterns decorating the pediments. The wide, arched front entrance on the east side is the most ornate with grouped granite columns, balconies over the first and second floors and a clock tower with a pyramidal roof that rises one hundred feet from the ground. The arched entrances on the north and south sides have smaller balconies above them, crowned with stone pediments with stone carved gargoyles perched on top. The courthouse has many carved details in the spandrels, around the windows and pediments and also a large carved eagle at the base of the clock tower. One of the more notable features of this courthouse is the interior arrangement of the offices and courtroom around a 30′ x 30′ central courtyard.

Over the years, the interior of the courthouse had been remodeled to accommodate to growing needs of the county. In 1949, the central courtyard was eliminated to make space for a vault and more offices and existing offices were remodeled, enlarged and rearranged. In 2002, as part of the Texas Historic Courthouse Preservation Program, Fayette County received a construction grant for $3,999,989 towards a complete historical courthouse restoration. The central courtyard was reconstructed with the addition of a glass skylight and the historic interior paint colors were reproduced. All of the woodwork was refinished, the floor and the seating in the courtroom was recreated, a new elevator was installed and one of the three-story staircases was reconstructed. During the excavation of the basement, a cistern was found, which predated the 1891 courthouse. Some of the exterior restoration work included the reconstruction of the slate shingle roof, limestone chimneys, copper scroll and ornamental finials and the building’s corner flagpoles. The restoration work began in June of 2003 and was completed in March of 2005 which was followed by a rededication ceremony that was held on June 25, 2005.